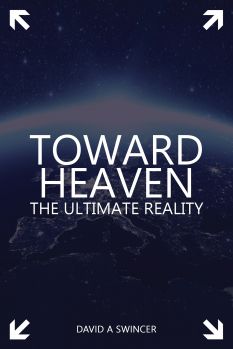 TOWARD HEAVEN: THE ULTIMATE REALITY

NOTE: Full text only avaiable as an e-Book. Print-on-demand available at Amazom: see link on the HOME page.

In the movement Toward Heaven—the Ultimate Reality, there are two phases to whet the appetite, as we approach the perfect status that is anticipated.

AT THE RAPTURE
For the Lord himself will come down from heaven, with a loud command, with the voice of the archangel and with the trumpet call of God, and the dead in Christ will rise first.
After that, we who are still alive and are left will be caught up together with them in the clouds to meet the Lord in the air. And so we will be with the Lord forever.
1 Thessalonians 4:16-17.

But this is not Heaven.

Additionally, at the Rapture:
Listen, I tell you a mystery: We will not all sleep, but we will all be changed—
in a flash, in the twinkling of an eye, at the last trumpet. For the trumpet will sound, the dead will be raised imperishable, and we will be changed.
For the perishable must clothe itself with the imperishable, and the mortal with immortality.
1 Corinthians 15:51-53.

What we can conclude is, that at the Rapture:
i. Man is with the Lord—in His presence in a different way—and again the location is unknown, but it does not matter!  Our current position in relation to the Lord is already irrevocably established—we are already seated in the heavenly places in Christ—and this will not change:
Who shall separate us from the love of Christ? …
For I am convinced that neither death nor life, neither angels nor demons, neither the present nor the future, nor any powers,
neither height nor depth, nor anything else in all creation, [NOTHING] will be able to separate us from the love of God that is in Christ Jesus our Lord.
Romans 8:35, 38-39.

After the Rapture, 1 Thessalonians 4:17 affirms the ongoing situation: And so we will be with the Lord forever.
ii. Man now has an immortal body—he has been changed—so one would understand a new level of identifying relationships (and this could be complicated by the presence of redeemed infants and/or foetuses, etc.—all those God has declared as saved). This does not now change.
The Rapture—with the acquisition of immortal bodies—results in a physical dimension being clearly introduced to “Heaven”—the heaven above the heavens. Actually, it continues the physical dimension already started by Jesus in His ascended form—with His resurrection body.
Additionally, this physical dimension allows for the expectancy of seeing Christ face to face, as Paul pointed out in Corinthians:
Now we see but a poor reflection as in a mirror; then we shall see face to face …
1 Corinthians 13:12.

iii. Sin is not immediately present, but it still exists. THIS IS THE PROBLEM AREA. The Ultimate Heaven is free of sin.

THE DEATH OF DEATH
Then death and Hades were thrown into the lake of fire.  The lake of fire is the second death.
Revelation 20:14.
Death is the last enemy to be destroyed:
Then the end will come, when he hands over the kingdom to God the Father after he has destroyed all dominion, authority and power.
For he must reign until he has put all his enemies under his feet.
The last enemy to be destroyed is death.
For he “has put everything under his feet.” Now when it says that “everything” has been put under him, it is clear that this does not include God himself, who put everything under Christ.
When he has done this, then the Son himself will be made subject to him who put everything under him, so that God may be all in all.
1 Corinthians 15:24-28.

• “Then the end will come” (verse 24). After the end of this age, the end of the Tribulation, the end of the Millennial Kingdom, and the end of the “unholy trinity”, finally comes THE END.
• “hands over the kingdom to God” (verse 24). In #1.3, we noted the nature of the Kingdom of God, and in particular the delegation of authority to Christ. He declared, “All authority in heaven and on earth has been given to me” for “this world order”. Jesus was the One Who was to execute God’s authority on earth in order to complete God’s purpose for “this world order”. We are at the climactic moment when all has been fulfilled. The purpose had been accomplished, and we can move into the Eternal State.
• “AFTER he has destroyed all dominion, authority and power” (verse 24). There are no short-cuts. All must be fulfilled. All competing powers and authorities must be subjugated to God’s authority. And so Christ will continue to reign—in “this world order” UNTIL He has put all his enemies under his feet (verse 25).
• “The last enemy to be destroyed is death” (verse 26). Satan and his two counterfeit underlings have been sent to the lake of fire. All authorities deriving their authority from Satan are without any basis. There is only one last enemy, “death”.
• “when He has done this” (verse 28). When Christ has defeated death—the death of death!—then the final act can take place.
• “THEN the Son himself will be made subject to him [God the Father] who put everything under him, so that God may be all in all” (verse 28). With the completion of His delegated role, Christ then surrenders this delegated authority back to His Father, so that God may be all in all [all things in everything].
Thus Christ has consummated the kingdom at His Second Coming to Reign, after His First Coming to inaugurate His kingdom.
The END has come for “this world order” and we proceed into the Eternal State: the New Heaven and the New Earth.
The three factors are now almost complete:
i. Man is with the Lord—on this earth—which is about to be renewed.
ii. Man has an immortal body—which does not change.
iii. Sin is gone! Death has been destroyed.
Only the renewal of the heavens and the earth is yet to be accomplished, in order to establish the Eternal Sate and the Ultimate Reality—Heaven.